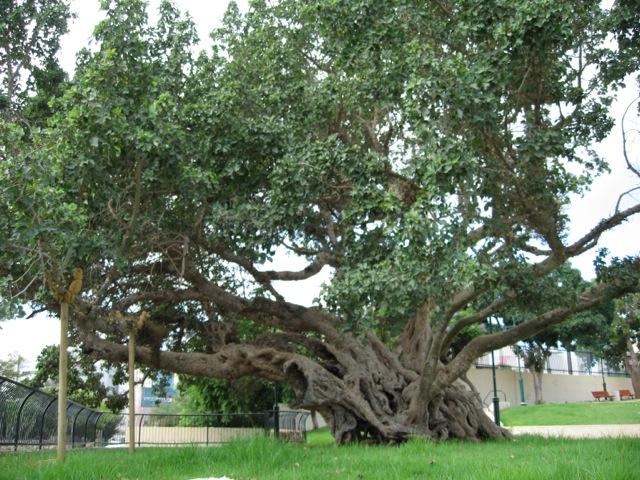 The sycamine tree had a very large and deep root structure

…If ye had faith as a grain of mustard seed, ye might say unto this sycamine tree, Be thou plucked up by the root, and be thou planted in the sea; and it should obey you. — Luke 17:6

The sycamine tree was known to have one of the deepest root structures of all trees in the Middle East. It was a vigorous and robust tree that grew to a height of thirty feet or more. Because its roots went down so deep into the earth, it was very difficult to kill. Hot weather and blistering temperatures had little effect on this tree because it was tapped into a water source down deep under the earth. Even cutting it to its base would not guarantee its death because its roots, hidden deep under the ground, would draw from underground sources of water, enabling it to keep resurfacing again and again. In other words, this tree was very difficult to eradicate.

What is the significance of Jesus referring to a sycamine tree?

The sycamine tree was a popular tree in that region and it grew rather tall, so for these reasons it had a deep and wide root system. The roots grew very deep in order to reach the water beneath the desert terrain which made removing the tree difficult. Unfortunately, cutting down to the stump would not be enough; you had to dig each main root out and remove it from the source.

This is much like harboring unforgiveness, which can be deeply rooted in our souls and develop large trees of bitterness that are not easily removed unless dug up and dealt with one experience at a time. Therefore, bitterness and unforgiveness will plant their roots deep into our soul and restrict the Holy Spirit from flourishing in us.

2.  The Materials it Created

The speed and popularity of the sycamine tree in that region made it accessible for materials, specifically for building caskets and coffins. The symbolism of how the wood from the tree is used to develop products of death and burial signifies how anchoring bitterness in our soul can eventually murder and bury our spiritual lives along with the things we love, such as ministry, our marriage, and relationships.

The fruit of the sycamine tree was very bitter and it was seen as the choice fruit for the impoverished people because of how common it was. The fruit was so bitter that in order to eat it you had to eat one small bite at a time, so it often took a person all day to eat one piece of fruit from the sycamine tree.

That’s similar to people who do not deal with unforgiveness. They take a bite of the offense, wallow and ponder on it, digest it, and repeat the cycle constantly. That makes the person’s bitterness develop more and more with each bite and inevitably keeps the person poor in spirit and in wealth.

The sycamine tree was unnaturally pollinated because the figs on the tree would attract wasps that would “sting” the fruit from one tree and then contaminate the bark of another tree. This transaction creates two outcomes: one, we get “stung” by offenses and allow them to populate other trees of bitterness in our hearts; and two, when bitterness has consumed who we are, we share that bitterness with someone else and “sting” them, pollinating a tree of bitterness within them. Essentially, bitterness and unforgiveness will suck the life out of us and contaminate those around us.

In summary, unforgiveness and bitterness are a result of deep-rooted offenses that will suffocate the development of our spiritual life. With this clarity regarding Luke 17:1-6, our next step is to pray and ask God for a revelation of offenses that we are holding on to, or those we have committed so we can seek out those we have offended to verbally ask for forgiveness and release them by granting them forgiveness.

The sycamine tree’s wood was the preferred wood for building caskets.

In Egypt and the Middle East, the sycamine tree was considered to be the preferred wood for building caskets and coffins. It grew quickly and in nearly any environment, making it accessible in many different places. It also grew best in dry conditions — the kind of conditions for which the Middle East is famous. These are two reasons sycamine wood was used in so many places for building caskets and coffins.

Again, we can see why this illustration of the sycamine tree is so ideal for portraying bitterness and unforgiveness. Just as the sycamine tree grew very quickly, so does bitterness and unforgiveness. In fact, it doesn’t take too long at all for these evil forces to get out of control and start taking over the whole place! When these fast-growing and ugly attitudes are allowed to grow freely, they not only spoil the condition of your own heart, but they ruin your relationships with other people.

Also, just as the sycamine tree grew easily in every environment, so does bitterness. It doesn’t matter where people are from, where they live, what kind of cultural background they grew up in, or what level of society they belong to — bitterness and unforgiveness grow in human hearts everywhere, for they are universal in their scope of evil influence.

The sycamine tree grew best where little rain fell and water was sparse. Isn’t this just like bitterness and unforgiveness? These negative attitudes flourish where spiritually dry conditions exist. You can almost count on finding bitterness and unforgiveness growing and blossoming where there is no repentance, no joy, and no fresh rain of the Spirit.

And don’t forget that sycamine wood was the preferred wood for building caskets and coffins. What a powerful message this is! It tells us that bitterness and unforgiveness are deadly. Harboring bitterness will spiritually bury you more quickly than anything else! These attitudes are the materials that Satan uses to put you six feet underground!

Let me stress this point to you because it’s so important: If you permit bitterness and unforgiveness to grow in your life, it won’t be long until these attitudes have killed your joy, stolen your peace, and canceled out your spiritual life!

The sycamine tree produced a fig that was very bitter to eat.

The sycamine tree and the mulberry tree were very similar in appearance; the two trees even produced a fruit that looked identical. However, the fruit of the sycamine tree was extremely bitter. Its fruit looked just as luscious and delicious as a mulberry fig. But when a person tasted the sycamine fig, he discovered that it was horribly bitter.

Jesus lets us know that like the sycamine fruit, the fruit of bitterness and unforgiveness is bitter, tart, and pungent. Like the fig, most people who are bitter and filled with unforgiveness chew on their feelings for a long time. They nibble on bitterness for a while; then they pause to digest what they’ve eaten. After they have reflected deeply on their offense, they return to the memory table to start nibbling on bitterness again — taking one little bite, then another little bite, then another. As they continue to think and meditate on their offense, they internalize their bitter feelings toward those who have offended them. In the end, their perpetual nibbling on the poisonous fruit of bitterness makes them bitter, sour people themselves.

And just as the primary consumers of the sycamine fruit were poor people, those who sit around and constantly meditate on every wrong that has ever been done to them are usually bound up with all kinds of poverty. Their bitter attitude not only makes them spiritually poor, but they are also frequently defeated, depressed, sick, and financially poor as well.

The sycamine tree was pollinated only by wasps.

It is very interesting to note that the sycamine tree was not naturally pollinated. The pollination process was only initiated when a wasp stuck its stinger right into the heart of the fruit. Thus, the tree and its fruit had to be “stung” in order to be reproduced.

Think of how many times you have heard a bitter person say: “I’ve been stung by that person once, but I’m not going to be stung again! What he did hurt me so badly that I’ll never let him get close enough to sting me again!” It is likely that people who make such a statement have been “stung” by a situation that the devil especially devised to pollinate their hearts and souls with bitterness and unforgiveness. When a person talks like this, you can know for sure that the wasp of bitterness got to them!

Jesus said that in order to rid this nuisance from one’s life, a person must have faith the size of “a grain of mustard seed.” The word “grain” is the Greek word kokkos. It describes a seed, a grain, or a very small kernel. Jesus uses the example of a “mustard” seed in this example. The word “mustard” is the Greek word sinapi, which refers to the small mustard plant that grows from a tiny, miniscule seed. here.

So what is your desire today, friend? Do you genuinely wish to be free from the bitterness, unforgiveness, and offense that has festered in your soul for so long? Are you ready to rip those destructive roots clear out of your heart so they won’t be able to resurface in your life again? Are you tired of those detrimental attitudes killing your joy, stealing your peace, and nullifying your spiritual life? If so, be sure to read tomorrow’s Sparkling Gem so you can find out exactly how to permanently eradicate these attitudes from your life!