Women Who Run with the Wolves

is a  creation of poetry and power on the inner life of women that began a revolution, and continues to transform the lives of millions around the world.

Dr Estes shows how, through the interpretation of story and her psychological commentary, women can reclaim and rejoice in their true feminine power. 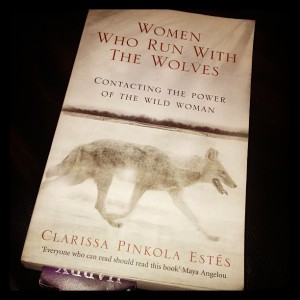 Over the first few months of 2013 I experienced a bit of a crisis AFTER thinking I had really, truly found myself this time. It turns out that that was a delusion. Or rather, my self-saboteur was at play.

One day in February, I woke up incredibly lost, listless, and sad. After the high I had been on I just couldn’t understand it. I had gotten through a hellish 2012 and had come out trumps. Why was it that I felt that my life was crumbling around me again. I stopped writing. I stopped blogging. I stopped taking photos. I stopped eating well. I just stopped everything – apart from the crying. I felt that the little black dog nipping at my heels again. Which made me more devastated. I didn’t want to go through that again. 2013 was meant to be a good year and I had had enough of shitty years! But with everything I did and said, I felt that I was f#$cking up my life again and again!

It was during this period that I consulted a psychic (more on that in another post, saw a councillor AND ordered a whole load of inspirational and self-help books. Reading – That has always been one thing I have kept up – This has always been my solace in the good and the bad times.

One of these books was Women Who Run with the Wolves

by Clarissa Pinkola Estes. I’ve been slowly working my way through Women Who Run with the Wolves

over the last few months, and have found that it is helping me tremendously. It was in the early pages that something in particular struck me hard, and that was the concept of the contra naturam.

While the cause of much human suffering can be traced to negligent fostering, there is also within the psyche naturally an innate contra naturam aspect, an “against nature” force. The contra naturam aspect opposes the positive: it is against development, against harmony, and against the wild. It is a derisive and murderous antagonist that is born into us, and even with the best parental nurture the intruder’s sole assignment is to attempt to turn all crossroads into closed roads. This predatory potentate shows up time after time in women’s dreams. It erupts in the midst of their most soulful and meaningful plans. It severs the woman from her intuitive nature. When its cutting work is done, it leaves the woman deadened in feeling, feeling frail to advance her life; her ideas and dreams lay at her feet drained of animation. p35-36

This bought about a light-bulb moment. Part of my psyche, this predatory potentate, the contra naturam aspect, was at play, and it was playing to win. I’m not a huge non-fiction reader, and I generally struggle to read self-help books (even though I still buy them), but these two paragraphs were like a sledge-hammer to the brain, and when added to what the psychic had said to me, it was as if I was awoken from my temporary slumber more enlightened, the fog lifted, and everything much, much clearer. It was just like that, as if I had woken up on the right side of bed and everything was good (well, some repairs were needed).

Did this trigger an epiphany?

Did the good part of my psyche go to battle with the contra naturam aspect and come out trumps?

I don’t know. I am just thankful to this book and some psychic guidance for delivering itself to me. The universe certainly works in mysterious ways.

Women’s cycles are there to cleanse one’s thinking, renewing one’s values, on a regular basis. To clear one’s psyche of trivia, sweep one’s self, clean up one’s thinking and feeling states on a regular basis. To build an enduring fire beneath the creative life, and cook up ideas on a systematic basis, means especially to cook, and with originality, a lot of unprecedented life in order to feed the relationship between oneself and the wildish nature. p94